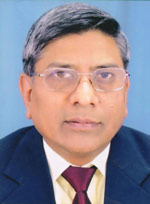 Devendra K Gupta, (July 1953), Director & CEO of the Superspecialty Paediatric Hospital and Postgraduate Teaching Institute, Noida-NCR, has been involved in patient care, teaching & research since 1979 at AIIMS, New Delhi, including as Professor and Head, Department of Paediatric Surgery for ~16 years.

He was appointed as the Vice Chancellor of King George’s Medical University, Lucknow, (April 2011-14), the Director and Hony. Professor of the Superspecialty Paediatric Hospital and Postgraduate Paediatric Institute Noida, the Hony. Professor of Centre for Molecular Biology Research, Lucknow. During his tenure, he established the Advanced Centre of Molecular Biological research with cutting edge technology, a new Postgraduate Institute for Child Health, Noida, upgraded department of Trauma and critical care, added 16 new departments and new posts of faculty, Residents and the Nurses at the KGMU during this tenure.

Of the over 90,000 surgical newborns and children managed, he has operated over 12,000 children with major congenital anomalies and cancers and others, including over 700 children with Hypospadias and disorders of Sexual development. He has trained 105 postgraduates who have established the speciality in several parts of the country and overseas. He has published 548 scientific articles, book chapters and editorials, and 12 reference books (two books have been translated in Chinese and Polish languages). He has been invited as Visiting Professor to deliver 486 guest Lectures in 85 countries and to demonstrate surgical techniques on rare disorders in India and several other countries. He established Nine academic awards in various associations and also at AIIMS (two with his own contributions).

Under his leadership, the Dept. of Paediatric Surgery at AIIMS, is recognized as one of the best 18 Centres in the world, attracting consultants from the world over for short term training, resulting in reversal of the brain drain. He was invited to deliver the Key note Lecture on Global Child Health Challenges at the Parliament Hill, Canada and on Universal health Coverage, Ministry of Health, Bangladesh.

For his academic excellence and international contributions, he has received the life time achievement awards from India and Pakistan, Hony. FRCS- Royal College of surgeons of Edinburg & Glasgow, FAMS from India and Romania, CICOPS Ambassador of science from Italy, FCSS -Srilanka, D.Sc (University of Medicine and Pharmacy Cluj Nepoca). He received the highest Honor as the Honorary Membership from the European Association of Paediatric Surgeons (EUPSA), representing 79 countries, and those from Ukraine, Pakistan, Nepal, Sweden, Bangladesh, Hungary, Romania.

Due to his international eminence, the Royal College of Surgeons, Srilanka & the Ibero-American Association of Paediatric Surgeons, South America decided unanimously to institute two Gold Medals in his Honour, a recognition to the country.